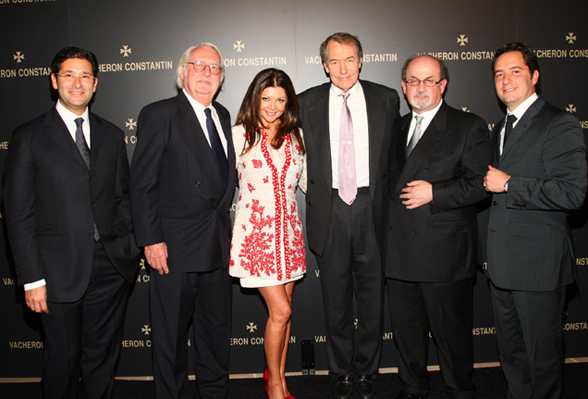 <> the launch of Quai De L’ile in Support of Afghanistan World Foundation at The IAC Building on October 22, 2008 in New York City.

On 22 October 2008, Vacheron Constantin launched its Quai de l’Ile collection in New York at the IAC Building, designed by the architect Frank Gehry. Throughout the evening, interactive screens projected on a wall over 37 metres in length underlined the personalized dimension of the collection’s timepieces. The opportunity to create their own watch by playing an active part in choosing the materials for the components was an unforgettable experience for all the guests.

To commemorate the evening, Vacheron Constantin welcomed the architect Richard Meier, the author Salman Rushdie, and the television news presenter Charlie Rose, who created watches in gold, palla dium and titanium respectively. The opportunity to create their own watch by playing an active part in choosing the materials for the components was an unforgettable experience for all the guests. The launch was dedicated to Afghanistan World Foundation projects in aid of women and children in Afghanistan. Sonia Nassery Cole, Chairperson, of Afghanistan Word Foundation spoke about the difficult living conditions of the Afghan people who are deprived of even the most basic necessities.

Among the 300 guests invited were artists, writers, architects and well-known journalists, as well as leading Hollywood stars like Oscar-winning Susan Sarandon, Kate Bosworth and Lindsay Price. A private concert by Ne-Yo, frequent winner of the Grammy platinum award, received a particularly enthusiastic ovation.