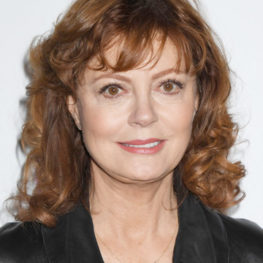 Known as an actress and an activist, Susan Sarandon has shared with the world her dramatic talents and personal convictions.  She graduated the Catholic University of America in 1968 and not long after made her first film Joe (1970).  After a few other film roles, Sarandon landed a part in The Rocky Horror Picture Show (1975), a campy musical, which has developed quite a cult following over the years.

Susan Sarandon earned her first Academy Award nomination for Atlantic City (1980) starring opposite screen legend Burt Lancaster. But her career really seemed to pick up steam later that decade with appearances in The Witches of Eastwick (1987) and Bull Durham (1988). In The Witches of Eastwick, she played one of three women seduced by the devil (Jack Nicholson) and developed special powers. This comedic battle of good versus evil showed Sarandon’s talent for lighter fare. In Bull Durham, she played a smart and sexy baseball team owner who becomes involved with one of her players—Tim Robbins who would become her partner in real life.

With Geena Davis, Susan Sarandon made one of her most memorable films Thelma and Louise (1991), which centered on the friendship of two women on a road trip turned wrong. Her portrayal of the tough, protective, and somewhat broken Louise brought her another Academy Award nomination. Sarandon was also nominated for Lorenzo’s Oil (1992) and The Client (1994). She played a nun in the gritty and powerful capital punishment drama Dead Man Walking (1995) and won her first Academy Award for her performance.

Outspoken on many issues, Susan Sarandon and Tim Robbins included information on the plight of Haitian HIV-positive refugees during the 1993 Academy Awards ceremony where they appeared as presenters. In 2006, she was one of the celebrities that joined antiwar activist Cindy Sheehan in a fast against the war in Iraq.

Susan Sarandon has three children: a daughter from a relationship with writer Franco Amurri and two sons with actor Tim Robbins.