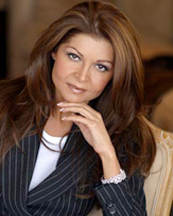 After escaping to the U.S. after the Soviet invasion, Sonia wrote a letter to the White House in the early 1980s. in a plea to help the people in her homeland. As a teenager, she was invited by President Reagan to visit him in Washington D.C., and answered his request to help him get Congressional authorization for Stinger missiles to be sent to Afghanistan. From that point on the tide began to turn, and the Communist Soviet regime fell to defeat.

Serving on the Board of the Afghanistan Relief Committee formed by past U.S. Ambassadors to Afghanistan, under Chairperson Jeane Kirkpatrick, Sonia took on new challenges. The organization asked her to assemble a major fund raising event to help draw interest to the desperate circumstances of millions of Afghan refugees fleeing their homeland to live in squalid border refugee camps. She obtained the backing of then Vice President George H.W. Bush, who served as an Honorary Chairman of her first fundraising event, A Night for Afghanistan that was presented in Phoenix, Arizona in early 1987. A great success, it was followed by a series of similar galas in major cities, culminating in a 1992 event at the Regent Beverly Hills Hotel , featuring acceptance of the Freedom Award by President Reagan. Not long afterward Sonia was recognized with a Peace Medal at the United Nations.

Following our 9/11 Tragedy and the international US-led coalition response, Sonia realized that these changing circumstances required her take expand her responsibilities in helping her native homeland. Forming the Afghanistan World Foundation in May 2002, she gained underwriting support from the Swiss firm of Audemars Piguet and Net Jets and began to plan for Time to Give: A Celebration of Freedom. Participation and endorsements followed, with President Hamid Karzai, former President George H.W. Bush, President Bill Clinton, Mrs. Nancy Reagan all serving as an Honorary Chairpersons. A host of influential dignitaries and celebrities joined the event’s committees honoring Muhammad Ali for his work in Afghanistan. The December 2003 event proved a great success reaching millions of people in the U.S., as well as audiences in countries around the world receiving satellite programming and focused attention on the need to support the reconstruction of Afghanistan.

In 2004 AWF supported the French charity, La Chaine de l’Espoir and its New York affiliate, Surgeons of Hope Foundation in completing construction of the Mother-Child Hospital in Kabul. The first wing, a 93 bed unit, was completed in September of 2005. Subsequent partnership between La Chaine de l’Espoir, the Government of Afghanistan, the Government of France and the Aga Khan Development Network has now transformed the former Mother and Child Hospital into a tertiary medical centre now known as the French Medical Institute for Children (FMIC). FMIC was inaugurated in April 2006 in the presence of President Hamid Karzai, France’s First Lady Madame Bernadette Chirac and His Highness the Aga Khan.

Ms. Cole lead an AWF group to Kabul, Afghanistan in April 2004 to advance her work in rebuilding schools, to coordinate with the various Ministries as well as other charitable organizations working in Afghanistan, and to visit with people at all levels of Afghan society. On this trip Ms. Cole directed and produced a documentary, “The Bread Winner”, about a day in the life of a nine-year old Afghan boy, Farouk, who supports his parents and siblings by selling newspapers and calendars. On December 4th 2006 at Capitol Hill, in the Cannon Caucus Ball Room, Ambassador Stuart Holliday who is Meridian International’s new President bestowed the Afghan and American Sisterhood Award as Congressional recognition of Ms. Cole’s devoted philanthropic services to education, economic and social development of her homeland.

In 2007 Ms. Cole completed the documentary “The Bread Winner”, a touching story about Farouk, a young Afghan boy who must sell newspapers on the streets of Kabul to feed his family of six. The film exemplifies the hardships of every day life for the majority of Afghans, as well as their strength and determination to persevere. “The Bread Winner” premiered at the Milan International Film Festival, and also screened on Capitol Hill for USAID, The World Bank and the Council of Foreign Relations, drawing much praise and attention for the Afghanistan World Foundation and its cause. “The Bread Winner”  premiered at the Milan International Film and has now screened in eight festivals around the world.

In addition to the ongoing work of the Afghanistan World Foundation, Ms. Cole completed “The Black Tulip”, serving as director, producer and writer. Based on true events, “The Black Tulip” is a journey of tragedy, struggle and hope that encompasses the current plight of the Afghan people. The film has garnered numerous accolades, including four awards at the Beverly Hills Film Festival, Best Feature Film at the Salento Film Festival and Boston International Film Festival and was featured on CBS, NBC, ABC, the New York Times, Reuters and Voice of America.

“American military support has been critical in liberating Afghanistan, first from the invading Communist Soviet forces which was followed by the opportunistic oppressive regime of the Taliban. Restoring dignity to a valiant people whose innocent lives have been torn apart for over two decades will need each one of us to be much more than silent bystanders. Those of us living in this great country, America, are known for our generosity and compassion in reaching out to those marginalized communities whose future generations have nothing to look forward to except despair and helplessness. We can change this hopeless path by our individual actions in reaching out and touching the lives of a voiceless people numb by grief inflicted from uninvited foreign armies and non-indigenous forces imposed on their once happy destiny. Afghanistan World Foundation dedicates each day in bringing awareness to as many people as possible in appealing for assistance to end the cruel human indignity inflicted on the Afghan people. We are a collective people and when human rights is violated anywhere, it is violated everywhere.”