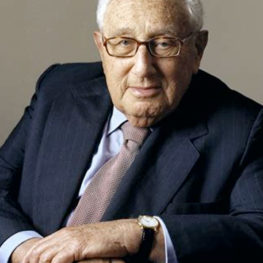 Celebrity Ambassadors Senior Board of Advisors

Henry Alfred Kissinger was the 56th Secretary of State of the United States from 1973 to 1977, continuing to hold the position of Assistant to the President for National Security Affairs which he first assumed in 1969 until 1975. Dr. Kissinger is the recipient of the 1973 Nobel Peace Prize. Dr. Kissinger’s involvement traces back to his friendship with Dr. Sarwar Nassery, Sonia Nassery Cole’s father. Dr. Kissinger also served as Chairperson of the Ambassador’s Ball for Afghanistan held at Regent Beverly Wilshire Hotel in 1990. Dr. Kissinger was also actively involved in 2003 Time to Give International Benefit for Afghanistan.

“Freedom safeguards the right to live without interference and to voice one’s opinions without fear of repression, to have a voice in establishing the laws that bind a diverse people into an integrated society, to elect one’s government, to receive an education, to move about with restraint, to worship as one pleases or not at all. These simple freedoms that we in America take for granted should be an alienable right of all mankind.”