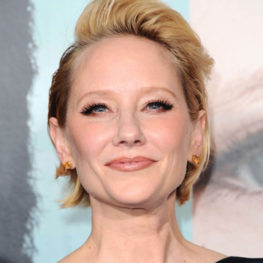 Anne Heche has proven herself as an exceptional actress in film, television, and stage. Her talents have earned her critical praise, as well as, both Tony and Emmy award nominations.

This summer, Heche co-stars with Thomas Jane and Jane Adams in the HBO comedy-series “Hung.” The show premieres on June 28, 2009.Heche last starred in the ABC series “Men in Trees” as a female relationship guru who moves to Alaska to get over her philandering ex-fiancée, only to discover herself surrounded by available men.

Heche earned her first primetime Emmy Award nomination for her portrayal of a drug-addicted mother in the 2004 Lifetime Television, original movie “Gracie’s Choice” alongside Diane Ladd. In 2005, Heche appeared in the Lifetime movie, “Fatal Desire” and the Hallmark Channel’s holiday movie “Silver Bells” on CBS, which was seen by over 16 million viewers. She has created memorable characters in several guest starring performances on hit shows including “Nip/Tuck,” “Everwood,” “Ally McBeal” and HBO’s telefilm, “If These Walls Could Talk,” directed by Cher.

On the big screen, Heche will next be seen alongside Ashton Kutcher in Anchor Bay’s “Spread,” directed by David Mackenzie. The film centers on Nikki (Kutcher), who has slept his way into a life of privilege. He shares his secrets as he hosts parties and beds scores of women, all while living it up at the Hollywood Hills home of a middle-aged female attorney, Samantha (Anne Heche).  The film is scheduled for release on August 14, 2009.

In 2004, Heche was seen opposite Nicole Kidman and Lauren Bacall in New Line Cinema’s “Birth,” directed by Jonathan Glazer.  The plot line involved a woman (Kidman) who, to the dismay of her friends (Heche) and family, believes that a 10-year-old boy is the reincarnation of her deceased husband. “Birth” was screened at the 2004 Venice Film Festival and the Deauville Film Festival.

Heche won The National Board of Review Award for Best Supporting Actress for Barry Levinson’s “Wag the Dog,” in which appeared opposite Robert DeNiro and Dustin Hoffman. In the previous year she starred opposite Harrison Ford in “Six Days Seven Nights.” She starred with Tommy Lee Jones in “Volcano” and achieved critical acclaim for her role in “Donnie Brasco.” She co-starred in Gus Van Zant’s update of “Psycho” with Vince Vaughn and Julianne Moore and “Auggie Rose,” alongside Jeff Goldblum, which was screened at the Montreal Film Festival. In 2002, Heche co-starred in the Denzel Washington drama, “John Q” and opposite Christina Ricci in the Miramax film, “Prozac Nation.” Other film credits include Agnieska Holland’s “The Third Miracle” opposite Ed Harris, “The Juror” with Demi Moore and Alec Baldwin, “Walking and Talking,” “The Wild Side,” “Twist of Fate,” Pie in the Sky,” “Milk Money” with Melanie Griffith, “The Investigator” and “I’ll Do Anything.”

In 2002, Heche made her Broadway debut in the critically acclaimed production of the Tony Award-winning play “Proof.”  She garnered rave reviews from theatre critics and the show was extended, making it one of the longest running non-musical plays in recent history. She triumphantly returned to Broadway in the Roundabout Theater stageproduction of “Twentieth Century” in 2004.  Her critically acclaimed performance opposite Alec Baldwin earned her a Tony Award nomination for Best Lead Actress in a Play.

Also a writer and director, Heche wrote and directed a short feature entitled “Reaching Normal,” for Showtime’s “First Director Series,” as well as the second installment of “If These Walls Could Talk II.” In September 2001, Simon & Schuster published Anne’s autobiographical “Call Me Crazy,” which appeared on The New York Times and the Los Angeles Times bestseller lists.